“Sitting up in the dark, he took a deep breath and scented a familiar, beguiling trace in the air…”

James Benmore‘s story ‘Jaggers & Crown’, which features in our anthology All These Little Worlds, follows the careers of a fictional comedy duo from the days of music hall, through radio, to television. It’s an excellent story, with a strong voice, and I was curious about how James came to write it. He’s been kind enough to provide this guest post, explaining the background of the story. 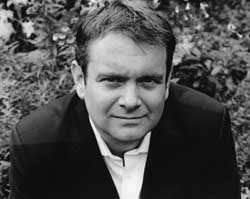 The story`Jaggers & Crown’ was very much inspired by my interest in British comedy programmes from the fifties and sixties, particularly radio shows such as Hancock’s Half Hour, The Goon Show and Round the Horne. Round the Horne is an especially fascinating programme: it was daring, ahead of its time, and the sketches involving the late Kenneth Williams are so funny and shocking considering homosexuality was still illegal back when they were recoreded.

Williams played one half of Julian and Sandy, who were gay in both senses of the word, and whose dialogue dripped with clever innuendo. I’m told that back then, many listeners would not have understood all the double meanings. It then occurred to me that as time went on, in the seventies and eighties, that depictions of homosexuality became more sadder and sexless, such as Mr Humphrey in Are You Being Served, who lived with his mother and was the butt of many homophobic remarks, and that sparked my interest in writing a short fictional journey through this period.

If Sonny Jaggers is based on anyone, it’s probably Kenneth Williams who was gay, took his own life and whose posthumous diaries showed he suffered from acute depression and had a spiteful streak. I also drew on the life of Tony Hancock, another depressive, an alcoholic and someone who also killed himself, as well as Peter Sellers who reguarly visited clairvoyants and wanted to be taken seriously as an actor.

Crown is more of a short cockney Norman Wisdom type in terms of his performance type. A loveable fool. But his real character isn’t modelled on anyone famous. I was more interested in creating an unreliable narrator and a false friend. Someone who admires and loves Sonny but who doesn’t have the courage to be him. — James Benmore

One Comments on “James Benmore on ‘Jaggers & Crown’”