“These regular anthologies ... are becoming essential volumes for fans of short fiction.”

Born and brought up in South London, Ben attended a succession of eccentric institutions known as ‘free’ schools, where lessons were optional and homework was a dirty word. This naturally enough led to reading Philosophy at the University of Warwick followed by a career in the film industry. Ben went from production to acquisitions and finally development for companies such as the UK Film Council, Fine Line Features and Working Title. Ben is currently co-head of development at Gorgeous Films.

After so long working on other’s people’s ideas, he finally developed some of his own into longer form prose. He recently gained a distinction in the MA in Creative Writing from the University of East Anglia and is on the verge of completing his first novel. He is also developing a series of historical thrillers. His most notable achievement is playing football with Sir Bobby Charlton, a lifetime high he wrote about for The Guardian. All else pales in comparison to this.

Ben Lyle lives and work in London, as he has done all his life, and can’t think of anywhere else he’d rather be. Except perhaps somewhere a little hotter. And with more space. And fewer people.

Ben's thriller The Irregular: A Different Class of Spy, written under the name H B Lyle, will be published by Hodder & Stoughton in May 2017.

Publications with The Fiction Desk 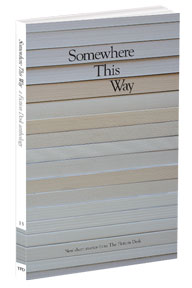 These authors appear in our new anthology, Somewhere This Way:

These authors appear in our twelfth anthology, And Nothing Remains: