“Sitting up in the dark, he took a deep breath and scented a familiar, beguiling trace in the air…”

Danny Rhodes grew up in Grantham, Lincolnshire before moving to Kent in 1994. He has lived in Canterbury ever since.

His debut novel, 'Asboville' was published in October 2006. Well received by critics it was selected as a Waterstones Booksellers Paperback of the Year and adapted for BBC Films by the dramatist Nick Leather.

His second novel 'Soldier Boy' was published in February 2009.

His novel 'Fan' (Arcadia Books 2014) tells the story of a football supporter trying to come to terms with the tragedy of Hillsborough, loss and a disconnect from the game he loves.

Danny continues to write short stories in a variety of genres, and in 2021 he was shortlisted for the BBC's National Short Story Award.

Publications with The Fiction Desk

These authors appear in our latest anthology, Houses Borders Ghosts:

These authors appear in our thirteenth anthology, Somewhere This Way: 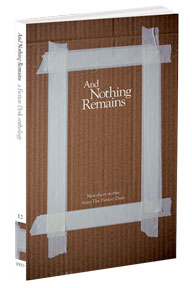 These authors appear in our twelfth anthology, And Nothing Remains: